This winter I was introduced to Yak wool for the first time. Initially it was like experiencing craft beer for the first time: it’s more expensive and cool, but would it really be better? Well, I’m a convert to good beer, and now I’m also a fan of the yak.

Kora’s founder, Michael Kleinwort, was first introduced to the yak while trekking the Eastern Himalayas. He pointed out a number of obvious improvements over merino that I had never thought about. The first thing Michael told me, “Yak wool is 40% warmer weight for weight, 66% more breathable and is 17% better at transporting water vapor away from the skin. Just like merino, it’s soft and naturally odor-resistant.”

“Wait a minute”, I said, “how could it possibly be so much warmer?” Michael explained that sheep harvested for merino wool live around 3,300′ while yaks live between 16,000′ – 19,000′. Obviously they’ve adapted to living in such harsh conditions and have the insulation to stay warm. Here are a few more interesting comparisons.

The journey from yak to base layer is a fascinating one and I’ll let this video explain itself.

While still a little skeptical of the yak (I was surprised by how amazingly soft it was when I first touched it), I agreed to test it out, mainly because they make a 3/4 length pant. 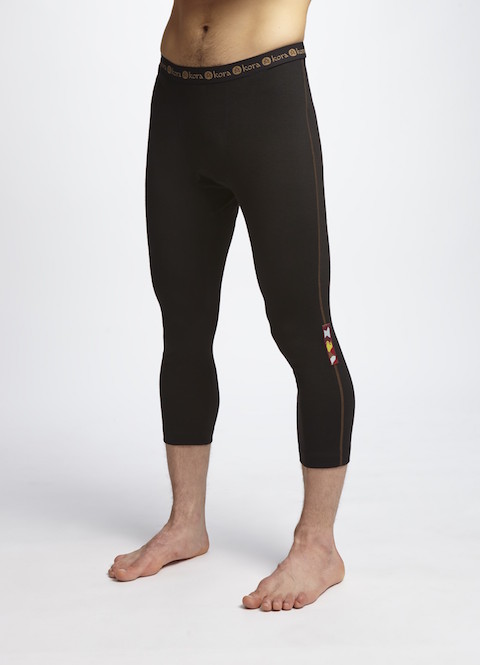 Do you understand just how rare it is to find a 3/4 length base layer pant? At the last Outdoor Retailer I asked no fewer than eight manufacturers and none of them made the shorter length. When I ski I don’t like anything interfering between my socks and boot liner and rolling them up becomes annoying. Kora, you’ve stolen my heart.

Up until trying out Kora’s yak wool pants I’ve almost exclusively worn synthetics. Experimenting over the years I’ve learned exactly what to wear on any given day to keep me warm and dry, even while touring on skis. But after giving these a go, I’ve switched to wearing yak wool every day with the exception of laundry day. Even though they’re odor resistant Christine still makes me wash them once per week.

Yak wool has surpassed every expectation I could have possibly had and I’m a true convert. Kora makes a variety of pants, shirt and jackets. Do they justify the $135 cost? After wearing it all winter, I think so. You might have to save for a while, but the wool seems thick and durable and should last many seasons, even while wearing it multiple days per week.