Break in? What break in? Initially I intended to climb four 14,000′ peaks in Colorado during the first snow of the year. At seven miles, it was supposed to be a relatively short trip. Unfortunately, whiteout conditions doubled that mileage as I go turned around in the storm.

The boots were amazing during the first 12 miles, but as I got dirt and rocks in them (I wasn’t wearing gaiters), hot spots began to form. That was completely my fault and not the boots.

Next up, ice climbing. For obvious reasons, it’s usually cold when you’re climbing ice, but 5 degrees fahrenheit was sort of ridiculous. I was testing multiple gloves on the same day and never could find a pair that was warm enough. Thankfully, I didn’t have to worry about my feet at the same time. My toes were warm even while I waited to climb the next pitch.

After four hours I finally began to feel a chill and numbness in my toes, but that’s only because I was standing around. If I was planning to stand around in cold temps, I’d definitely be wearing bigger, warmer plastic boots.

The Lowa Mountain Expert is a great boot for mountaineering and ice climbing, and even warm enough to shovel a few driveways. It’s a great all around boot that will sit at the front of my gear shed for many years. 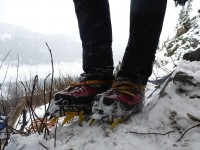 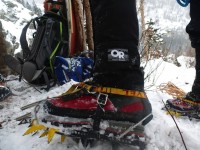